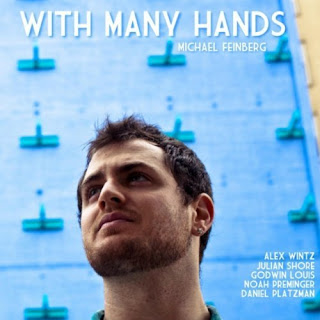 Michael Feinberg is part of the generation just coming into play on the jazz stage. He's 22 and already releasing his second album With Many Hands (no label indicated). A cynic would say that an up-and-coming young player stands a better chance of paying for self-releases, assuming his or her parents have the money and are more willing to finance the production and promotion costs at this lifestage. Now that would be a nasty thing to insinuate. You get the money where you can and we all benefit from a finely turned recorded set such as this one. He may have been a thrifty lad. It isn't our business on anything other than on the level of the history-sociology-anthropology of jazz economics today (which IS interesting because man, things are changing out there). Indeed in the case of Michael Feinberg's Hands the music is of a such high caliber that one is simply glad the money was at hand to allow us to hear the music.

This is an "all youngster" outfit, as Ed Sullivan might have said. The oldest is 24. But generation and age aside, this is a band playing contemporary jazz well, with fire and a bit of electricity. Noah Preminger and his tenor we have encountered happily on his own album (see review at the Gapplegate Music Blog site, link on this page). He has poise and fire. His front line running buddy Godwin Louis on alto keeps the pace, solos well and interacts with Noah in ways one has to appreciate. The rhythm team, which includes Daniel Platzman, drums, and Julian Shore, pianist, pushes the music along well and Shore solos with swingingly good ears and moxy. Alex Wintz plays sophisticated rock-inflected guitar and sounds like someone we should hear more from.

And of course there's Mr. Feinberg himself. He handles the upright like someone with more years behind him. He walks and syncopates-drives with ease and heat, can turn in a good solo and has definite compositional talents. The charts here are his. They are complex, advanced and multi-faceted. They show the band off to good advantage. The title cut in particular stays in the mind long after the CD stops playing. Stylistically Feinberg's aggregation has the sort of accessibility combined with substance that Dave Holland's small groups have had for years. There's a rock tinge. There's a Wayne Shorteresque-Hancockian finesse with harmonic heft.

It is a fine effort and one can only predict more and greater things from Feinberg and his colleagues. I will welcome the developments! Meanwhile take a listen to this one. The young lions of today have some growl!
Posted by Grego Applegate Edwards at 4:44 AM