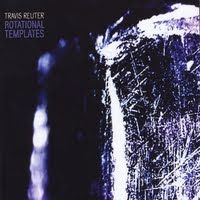 NY-based guitarist Travis Reuter shows us that there is more than one way to take fusion rock into more abstract territory. His Rotational Templates (New Focus 117) unfolds in long composed angular juxtipositions that start with the implications of a rock beat, then break up that beat into forward chopped segments that the rhythm section takes up. Against that are guitar-tenor-Rhodes countermelodies that fracture along the lines of the rhythm, but extend the thickness of the music and the momentum of the beat segments. Or at least that's what I hear. It has a counterpart in the chopped bop that young trumpeter Peter Evans is putting across in such an interesting manner (see my Gapplegate Music Blog for various reviews of his work). Neither is imitating the other. The results are different as is the sound of the band. But there is a kind of convergence (and the M-Base folks have done some chopped funk over the years too, but perhaps with a little more forward thrust).

It's a music with room for some excellently conceived solos. Travis has plenty of facility and a stretched har-melodic sense that he unleashes with drive, energy and a recognizably original sound. Jeremy Viner on tenor and Bobby Avey on electric piano bring in their own restless sorts of melodic modulations. Chris Tordini's bass and Jason Nazary's drums give what goes on its definition through some impressively executed chop kicks, relentless in their consistent push, building a kind of excitement that makes the plain places rough in a sort of over-all fashion.

If that sounds complicated to you, the hearing of the music is not a difficult experience. There is sense to it all. Its consistency is the key that unlocks the complexity, revealing pattern and development within a sort of sameness.

Travis has something very interesting going on with this one. He plays in a kind of personal expanded tonality in ways that are exciting. His band has grabbed onto what he is into and in that way they speak as one.

Wow. If you dig the out electric thing this will hit you right in the breadbasket. It's a winning combination of factors and Travis Reuter is a musical sensibility that bears close watching! www.newfocusrecordings.com has the album for direct purchase, as does CD Baby.
Posted by Grego Applegate Edwards at 4:50 AM