"Level" by Guitarist Eric Hofbauer and the Infrared Band: In and Out Subtlety 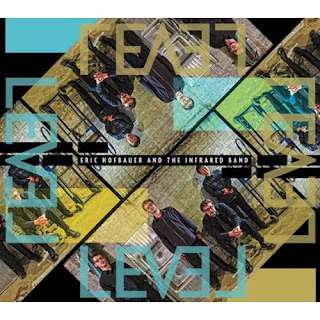 Guitar-led contemporary jazz units can start just about anywhere and go just about anywhere else. This might be confusing for the novice listener. For the intiated the wealth of possibilities being realized out there these days is real and exciting to follow. Boston-based guitarist Eric Hofbauer and his Infrared Band illustrate this nicely, especially on their new sophomore effort Level (Creative Nation 020). It's a quartet of Bostonians who may not be well-known right now but they come through with a very good shimmering, simmering effort and a musical package that has plenty on the content side. It's Hofbauer on the electric, Kelly Roberge on tenor, Sean Farias, acoustic bass, and Miki Matsuki on drums.

The album title's palindrom serves to introduce the idea of duality in the universe, which Eric states is a theme of the music. Be that as it may, the listener is treated to a very involved ensemble music that shows evidence that Hofbauer's good ideas have been worked out fully with lots of rehearsal time. There is an intricate counterpoint that seems at times written, at times improvised. There is a modernly swinging rhythm section that may break up the phasing for a hocket-style presentation or blow on through in the manner of the best of the new rhythmic mid-period-Miles-through-today timemasters.

Eric's guitar and Kelly's tenor dialog extensively and both are in a soulful yet very modern mode. Sean's bass makes it a three-way conversation often enough. It's a music about some very good soloing but some even more compelling compositional ensemble jazz, fairly quiet and cool but in no way emasculated. Hofbauer puts together some very worthy comping of extended chords and advanced, original sounding lines while Kelly's tenor takes the chromatic post-bop sound that is in the air and makes it unique with asymmetrical phrasing, great notes and extensive tenor sound-color manipulation.

More than that Level excels as an excellent and original compositional platform that sets off the players's considerable improvisational abilities in very good ways. It's an album that may not get you until you hear it a number of times. Then it quietly inches its way into one's music pleasure zone. If you like your jazz modern and sophisticated, you are going to love this one.
Posted by Grego Applegate Edwards at 5:20 AM