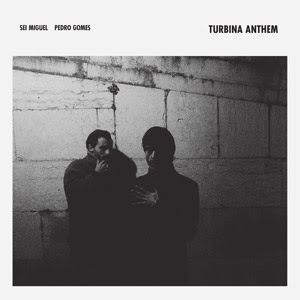 The free improv duet tends to bring out the musical personalities of the participants in bolder relief than an ensemble set. It's more than just a matter of the increased exposure a smaller number of voices affords; it's also a matter of the two-way conversational dialogues that can develop, with each soloist responding to the interaction more directly and immediately. Like a good two-person conversation brings out the thoughts and speech-patterns of the speakers to perhaps their best advantage, so it can be in free improv duets.

So that is at least on Turbina Anthem (No Business NBCD 29), a new release that features Sei Miguel on pocket trumpet and Pedro Gomes on mostly electric guitar. Here are two players that stand out by bringing an electric-noise guitar element into close conjunction with post-Don-Cherry out bugle-call aesthetic.

Both players stay in their own zone throughout. But by the contrast and the judicious use of brief silences, they establish a two-in-one space so personal and original that by the end of the disk you feel you know the players as individual musical speechifiers, not generic new thingers of a semi-anonymous sort.

Pedro detunes, scratches out abstract oaths, and alternates pitch, noise and electronic distortion in ways that continually play against the fragile, insistent and dancing intervallic skips of Sei Miguel's brassiness. As you listen to Sei Miguel on this disk you realize that what at first sounds random is really more thematic in a very expanded sense. He favors certain intervals and their repetition in such a manner that it makes for an interesting response to Pedro's noise clusters. But just when you think you've figured out what will happen for the rest of the disk, something changes it up. For example when Pedro switches to acoustic guitar and coaxes from the instrument some gently arpeggiated or simultaneously sounded clusters.

It goes without saying that this recording will not appeal to everybody. Those patient and open to out aural spaces will perhaps like me grow to like hearing the dialogic logic of this particular brand of freedom unfold over the course of the record. After hearing Turbina Anthem a few times I felt that I could recognize these players fairly readily in a kind of blindfold test if I were to hear them on other future recordings. That IS what it's all about. No Business releases this in a limited 500 copy edition, so grab a copy now before they go. I've added a No Business link to this page in case you feel the urge to do so.
Posted by Grego Applegate Edwards at 4:37 AM