Johnny Winter Shines Forth on DVD "Live at Rockpalast" 1979 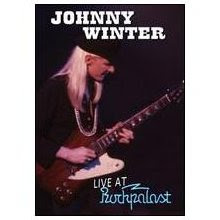 Of all the blues-rock titans of the guitar circa the '60s and '70s, Hendrix, Clapton, Beck, Page, Guy, etc., Johnny Winter seems to be an artist that has suffered somewhat of an eclipse in terms of recognition, though his brilliance and stature should dictate otherwise.

All that may indeed be changing. The new 90-minute DVD Live at Rockpalast (MVD Visual 51840) should help. It is a long, vibrant 1979 set of Winter and his trio live in concert, originally aired on a German TV show at the time.

The appearance came at a time not long after his White, Hot and Blue album, which underscored his re-emphasis on the blues stylings that made his name in the first place. They do a fair number of songs from that album, in the main reworked blues classics.

The sound is good, the camera work solid, and you get some really ripping Johnny picking, sliding and singing his way through some very electric blues. For around 15 minutes towards the end bassist John Paris switches off with Johnny and plays guitar and does vocals while Johnny hits the bass. This is a moment that is not quite at the level of what Winter is all about, but it's short and not at all bad.

Anyone who digs the electric blues of the era and Johnny in particular will dig this one. It has extended versions, plenty of solo time and the patented Winter fire blazing on the hearth.

I believe the DVD officially comes out next month (August) in the States but you may already be able to find it on line as we speak.
Posted by Grego Applegate Edwards at 5:42 AM