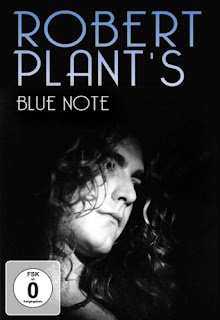 When Robert Plant hit the grooves and airwaves with Led Zeppelin as I was coming of age, I have to say that I took him for granted. A supercharged instrument at a time when so much was going on in rock, he stood out as coming out of the blues, but went beyond to forge a style tremendously influential in what eventually was known as metal. If I paid more attention at the time to what was happening instrumentally, it was to my temporary loss. Of course he was more than just a rock screamer. As a soon-to-be-released DVD Robert Plant's Blue Note (Sexy Intellectual SIDVD567) shows clearly, he was and is a complex character with diverse interests, influences and a long career of stylistic change and development.

The video documents the shifting scene around him from the early-mid sixties onwards and his engagement with it. There is a fairly detailed look at the British blues boom of the '60s, spawned by a tepid pop scene and the infusion through imported records and personal appearances in England of the great black artists with their iconic excitement and sheer power. The general scene and Plant's eventual involvement with it are covered with depth and insight. The DVD goes on to look at the formation of Plant's own band, the subsequent formation of Led Zeppelin and the dynamic Page-Plant dialog, the expansion of the band from a quasi-hard-blues to a metal and progressive outfit, and then Plant's long solo career and his flirtation with popular synth-based styles, his return to metal, his renewed involvement with the psychedelic sounds of the late '60s California world, and finally his growth through involvement in North African/Mideastern music styles and ultimately roots-folk and country.

This is a long and detailed DVD (155 minutes) allowing for lots of interview footage of Plant and his contemporaries along with select musical journalists. There's a very fair amount of concert footage of Plant and others in the course of the presentation. And there is an overarching narrative with a main theme, Plant's fascination and immersion in the "blue note," the intervals and bending tones of the blues.

There are many little assertions and details I might take exception to here. They are essentially about musical issues that would take us far beyond the scope of this review blurb, having to do with the roots of blues in Africa, the status of non-blues music in relation to the blues, and such like things. It's enough to say that I don't always completely agree with some of the points raised by the journalists on the DVD.

In the end though what matters is that you finish watching this longish DVD with a renewed appreciation of Plant as a musical force, his respect for the black music and world music roots he has engaged in various ways, and an appreciation for the open-ended nature of his musical quest. Mr. Plant is more than just an extraordinary vocalist. He has had an important musical stylistic influence on everything from metal to world-infused rock.

I don't think anyone with a serious interest in the history of rock and or Plant the artist will be disappointed in this DVD. It is well done.
Posted by Grego Applegate Edwards at 5:00 AM