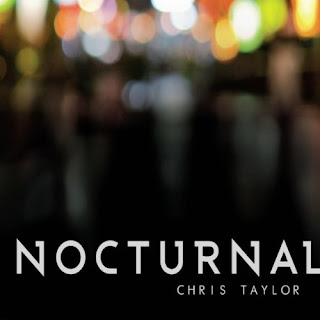 Guitarist Chris Taylor is one of those guys you want to cheer on. After 30 years of gigging around, he comes up with a debut album that is a corker. Nocturnal (Abstract Logic 029) doesn't come out of outer space. He's listened to and absorbed some of the things that have been going on, like Weather Report, Allan Holdsworth and Pat Metheny, but he's come up with something very much his. There's a cosmic psychedelic element, a world-music element, and there is what is best termed a CHRIS TAYLOR element, something you aren't expecting that he brings into the mix to give it another direction than the one you assumed was where the music was going.

His playing is electric, sculpted in ways that are his own, and very musical. The same goes for his compositions and arrangements. It's a kind of fusion, yes. It's a new kind of fusion, without the hackneyed riffs, diarrhetorically noteful cliches and other devices we hear people use and reuse until there is little life left in them.

It's an ensemble music with guitar in almost a concerto-like position--though there's also some great tenor-soprano soloing as well. The rhythm section is ON it, whether funking-rocking with taste or swinging hard. And Chris plays like a mother when he gets cranking.

This is primo new jazz-rock. It is a very impressive first album for anybody. Coming after 30 years of dues-paying Chris Taylor must be feeling some satisfaction. He should be. Dig this one and you will not regret it, I suspect.
Posted by Grego Applegate Edwards at 6:58 AM