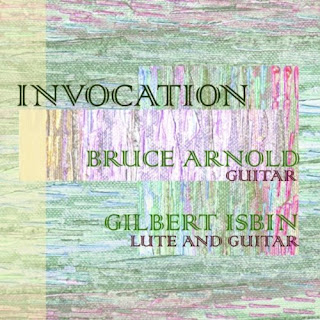 Bruce Arnold is a guitarist of many-sides, a kind of prism of many refracted sounds. When he performed in Belgium a while ago he had a chance to further widen the spectrum of his aural coverage. There he met up with lutenist-guitarist Gilbert Isbin to record a series of subtle duets released on CD as Invocation (Muse Eek 153).

A beautiful sound and wide-ranging compositional-improvisational end-games resulted. There are some mood enhancing pieces by both parties. And there are more open-ended improvisations. Arnold's acoustic guitar and Isbin's lute create a ravishing, meditative sonance, each listening carefully to create a balance between the more delicate lute presence and the acoustic.

The music has the kind of spatial quality of some of the early-middle period duet-solo ECM recordings with folks like Towner, Abercrombie, et al. Nonetheless Arnold and Isbin create their own tapestry of sound that does what it does with intelligence and originality.

It is a very stimulating listening experience that allows you to drift into your brown study or follow with interest the dialog that unveils itself in the course of the album. Either way this is a good bet. Try it and you may well like it.
Posted by Grego Applegate Edwards at 4:40 AM