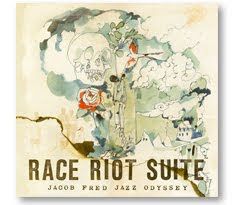 The Jacob Fred Jazz Odyssey have continually gone their own way. I must say I have not liked absolutely everything they've done, and at 21 albums (!) and counting I've missed a few. I do think they've entered a very productive stage in the last few albums. And their Race Riot Suite (Royal Potato Family), just out today I believe, puts them in vital territory.

It's the regular band [Brian Haas, piano; Chris Combs, steel guitar; Jeff Harshbarger, contrabass; and Josh Raymer, drums] plus five horns: Steven Bernstein on trumpet plus tenor-bari, two more tenors and trombone. It's a full-length suite that depicts musically a racial pogram that took place in Tulsa in 1921. It was brought on by a racist and manipulative white oil elite in tandem with the local government and the news media that did their bidding. That's a dark subject matter indeed and Chris Combs has created a work that expresses simultaneously a sense of outrage and a matter-of-factly dark sensibility in very creative terms.

The writing is excellent, with the core band and especially Combs's steel interacting with the horns for a brashly raucous music that has the freedom and fire of Carla Bley's Genuine Tong Funeral and Liberation Music, only a great deal more darkness. It is a marvelous pairing of the sharply defined individuality of the players with a score that is ultra-expressive.

Every bit of this suite counts; there is no dead weight whatsoever. In the end you get a sense of a musical reckoning, a retribution in tone, a emotionally wrought expression of disgust and sorrow. It does to my mind establish Chris Combs as an important jazz composer of our era, someone I hope we can look to for more music such as this.

It's music that disturbs, haunts and ultimately, honors the victims with a kind of musical memorial. Excellent music; highly recommended.
Posted by Grego Applegate Edwards at 4:57 AM