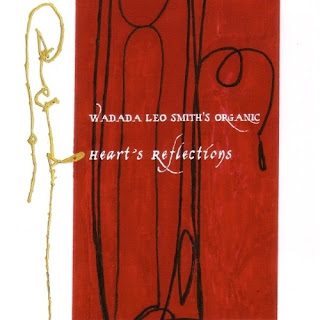 Put Wadada Leo Smith's Organic group's Heart's Reflections (Cuneiform Records Rune 330/331) on and listen. From the beginning you know that this isn't some warmed over fusion from yesterday. Pheeroan Aklaf's bass drum rings out like a barrel. None of the muffled "kick" sound. He plays rock-funk with all the complexity of his swing and freetime playing. Complex, varied, yet pushing the feel ahead. Wadada sounds not like a Miles clone, but like someone who is furthering his own playing after coming out of the experience of playing Miles's electric music (with Yo Miles). There's a large band at play here: two people manipulating electric sounds on the laptop. The distinct one-two punch of Brandon Ross and Michael Gregory on electric guitar, who weave in and out of the music in their own way, as themselves. Then there's the two-bass hit of John Lundberg and Skuli Sverrisson, plus two more electric guitarists, violin. alto and tenor and, oh yes, Angelica Sanchez on keyboards and piano, a great addition because she goes far beyond the funk licks some players would expect to play. Like Jarrett in Miles's "Live-Evil" band, she takes her own playing style and adjusts it to the context. She enriches the music in a very good way by so doing.

This is no rote funk thing. Rhythms are loosely jazzesque, sometimes even free, and the Wadada compositions go way beyond a few ostinatos and running lines.

This is electric music that dares to be art music. It's miles beyond a Miles tribute band. It's a Wadada's music band. Free electric post-funk? That's one label to put on it. The point is that there is an evolved group sound that brings fascination. Wadada has gotten a bead on where to take the music and he is taking it there.

Probably the most important electric band working in the music today and this is one of their very finest (double) albums. You have to check it out!
Posted by Grego Applegate Edwards at 4:45 AM