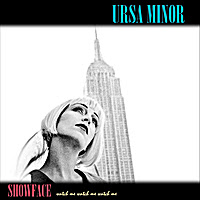 Ursa Minor is the brain child of singer-songwriter Michelle Casillas. Their second venture into the world of sound, Showface: Watch Me Watch Me Watch Me (self released), finds Tony Scherr heading the production and playing guitar along with Rob Jost on bass and Robert DiPietro at the drums.

Michelle wrote the bulk of the songs and sings lead vocals in her convincing way. Chrissie Hynde and the Pretenders are somewhere lurking in the background as huge influences on the music, and so if you are into those folks, this will give you an extension of their punchy and wry rock with a central focus on songs in ways that are not entirely dissimilar. Ursa Minor may not have as many killer songs at the album two juncture, but they are getting close.

It's a good outlet for Michelle Casillas's magnetic vocal qualities and her tightly spun rock instrumentalist cohorts. These people are sounding good. There's plenty to like. Give them a spin and see. . .
Posted by Grego Applegate Edwards at 4:26 AM