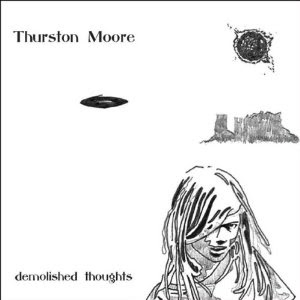 It's the Monday after the passage of Hurricane Irene from my area and I am glad to get back to work. A shout-out of sympathy for any who did not fare as well as we did.

Anyone who follows his career knows that the solo albums are not exactly the same full-band onslaughts as the Sonic's works. And that is true of Demolished Thoughts as well. It centers on Thurston's trademark guitar tuning and interesting chordal sequences, here on 6- or 12-string acoustic. There are good songs, somewhat in a cosmic contemplativeness mode. His voice is front and center communicating the essence of the lyrics and melody.

And there are some nicely put together cello/string parts and some nice touches with a harp now and then. I suppose you could say it's psychedelic light. But seriously in IS that in Thurston's very inimitable way.

If you like what he does in the Sonic's bag, once you get used to this, you'll like this one also.

It is music with a lot of depth, nice little touches, subtlety. So it's a winner then.
Posted by Grego Applegate Edwards at 4:33 AM