Richard Nelson Presents A Way Into the Big Band with "Pursuit" 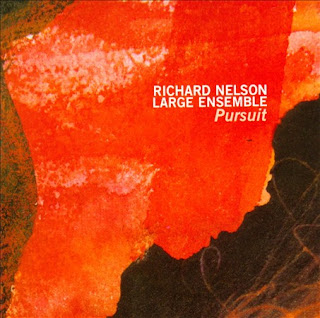 Guitarist-jazz composer. Often it seems to go "pianist-jazz composer." There are various reasons for that, none of which need detain us right now. Richard Nelson belongs to the former category. He teaches up in Maine and has given us this summer a CD of his music for big band, Pursuit (Heliotrope 1011). The album title is also the name of the five-part suite that forms the bulk of the music here. The big band is comprised I assume of local associates of Mr. Nelson. They generally do a good job realizing the nuances of the score. It's music with a modern sound to it. You hear vestiges of Evans, Russell, Schneider and such, but there is a Nelsonian thrust to the entire suite that shows he has his ideas together and has realized them without recourse to any sort of copycatting imitation.

This is music that allows for space, setting off the large ensemble's full sound in effectively contrasting ways. There are some soloists as you can expect and they do fine in their respective spotlights. Richard Nelson's guitar is in there too, though he does not in any way dominate the music played here. What solos he does play show some advanced melodizing.

It's a live recording of a pretty complex score so when one hears a few passages that might bear tightening up, one can be understanding and there is nothing terribly egregious. I imagine an extra few thousand in recording budget (for more rehearsal) might have taken care of it. These aren't times when one can expect a great deal in that zone, of course. It's good to get a chance to hear this music. That's what counts.

The disk is completed by a couple of numbers by the Richard Nelson Quintet. They give you a more intimate look at the compositional Nelson and some rather nice guitar work too. The flow from large to small is quite smooth because the sound of the compositions have similarities that make the segue easy and logical, and he writes for the quintet as if each instrument were a "section" in a larger ensemble. That gives continuity and a richly musical experience as well.

Richard Nelson has not gotten to the point where one can trumpet that "there is a major new voice in the big-band compositional world." Nonetheless this is music worthy of your discerning ears. It swings. It expands your harmonic sense. It uses the instruments in combinations both expected and unexpected. It avoids cliches.

Substantial. Worth hearing. May Richard Nelson's music continue to thrive.


Posted by Grego Applegate Edwards at 4:54 AM