Guitarist Steve Kimock and KVHW, An Evening of Live Jamband in A Free Legal Download, 1999 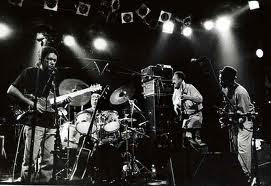 Eventually the question has to arise. Do jambands have the musical chops to compete one-on-one with a jazz-rock fusion outfit? It's a question of pitting category against category, which ultimately is a kind of abstraction from the day-to-day gigs and recordings of probably hundreds, even thousands of bands. Which ones do you pick as most representative? And at what point can you be satisfied that you have done justice to each genre? I don't think it's entirely profitable to pose the question in this way, certainly not in any glib, blithe, superficial manner. Have historic bands like the Dead, have scenes like those in San Francisco in the late-'60s had an impact on the jazz musicians working then and in years to come? Clearly. And have the jazz folks in turn exercised an influence in return? Yes, of course. In some ways it's like any number of musical genres that have socio-spatial proximity. Everything gets influenced by everything else, to a greater or lesser degree. That answer doesn't satisfy me completely, but it will have to do for now.

So today a jamband, one I believe is no longer touring, but an interesting one nonetheless. It's KVHW, a collaborative quartet of Steve Kimock, lead guitar, Bobby Vega, bass, Alan Hertz, drums, and ex-Mother Ray White on rhythm guitar and vocals. The Wikipedia article on them is sketchy and a bit of a mess, but apparently Ike Willis was replaced by Terry Haggerty during part of 1999, but the information apears to contradict itself about when that occurred--unless they are saying that there were two periods where he was not a part of the band. The article gives the band's active life as January 1998 through December of 1999. So those are the basic facts.

The recording I have playing as I write this is a free and legal download from archive.org (http://www.archive.org/details/kvhw1999-05-17). It's a full 3-CD set of the band holding forth at Cafe Tomo in Arcata, CA on the night of May 17, 1999. Judging from the lack of tell-tale Ike Willis vocals this must be a part of the Terry Haggerty stint.

KVHW had a Dead derived jamband feel, with Kimock playing his own variant lead style in lineage with Garcia. The rhythm section has a Dead-like looseness. And they jam at length on a number of originals and covers.

One thing that is a constant, that is the loose but insistent rock-funk underpinning to much of that goes on, at least at the start of each number. With a jamband on a good night, just as in "jazz," the best things are taking place after the stating of the song formalities. It is then that Kimock stretches out and the rhythm section expands their groove, going a hypnotic route or creating a more spacy cloud of pulsating sound. Sometimes the interplay between lead and rhythm guitar intensifies for periods of interlocking counterpoint. And it's the rhythm-lead (and bass) interactions and the function of the rhythm guitar in general that I feel are some of the more innovative aspects of jamband style. Some of it comes out of James Brown's funk, but there is further elaboration going on that is specifically jamband-centered, I think.

Ultimately with KVHW you feel like whatever comes, they have planted their feet in the ROCK jam context. And that usually means a pretty persistent sticking to the single-key center vamp.

For all that there are bright moments to be heard on this long gig-night. It's free, so you can listen and like what you like, and not what you don't. Go to it if you care to...

Posted by Grego Applegate Edwards at 5:45 AM