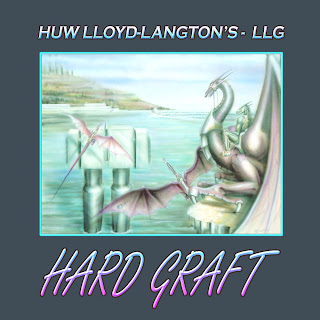 Toward the end of this month Huw Lloyd-Langton's LLG will be releasing Hard Graft (LLG CD 009). It is dedicated to keyboardist Tim Rice, who passed away from cancer just two weeks after the recording was finished.

Huw Lloyd-Langton, for those who don't know, has had a long time association with prog-psych dynamo Hawkwind. Now that to me does not totally prepare you for this album. This is hard-edged wall of sound contemporary rock with Huw's extraordinary guitar presence, his vocals and good rock songs the central focus. Imagine late Hendrix filtered through later period Frank Marino/Mahogany Rush, then filtered through Hawkwind and you begin to get the feel for the guitar sound and the sound of this recording.

It's a beautiful record and it is well worth your ear-time!! I'd say more but it is what it is! One of the rock albums of the year for me.
Posted by Grego Applegate Edwards at 6:10 AM