Guitarist Mike Rood Debuts with "The Desert and the City" 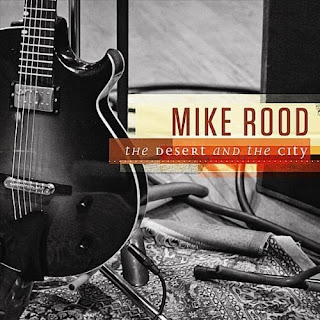 Sometimes I get so many CDs to audition that the first listen is a matter of waiting to see if the artist eliminates him or herself by showing poor execution, hitting on a banal and coarse sort of commercialism, or otherwise just not quite making the grade. Mike Rood's album was subjected to this initial scrutiny and came through with music that surpassed my expectations completely. That is, on his debut album The Desert and the City (self-released, no #).

Mike studied from a rather early age with John Patitucci and later Vic Juris, among others, and graduated from the New School, Jazz Studies Division. He plays with five-finger picks, which of course is not at all a norm for jazz guitarists (he's the only one I've heard of doing this). His sound is a combination of that and a treble reduced, mellow, slightly reverberent jazz sound that folks like John Abercrombie have made current.

The album features his group, a quartet of sympathetic musicians that include tenor saxist Mike Bjella, Alex Spradling on acoustic bass, and Goh Izawa on drums. They keep with him and do a fine job, but this is Mike Rood's moment to shine and he does. His soloing combines an admirable harmonic and melodic sense that goes far from the standard cliches and stays there. His compositions are sophisticated and well thought out. The album has a vaguely ECM-ish ambience to it.

This is a most promising new guitarist and he shows a polish and subtlety that is quite rare in a newcomer just entering onto the scene.

Excellent job. With any luck Mr. Rood will be on the scene for many years to come. He could be quite important!
Posted by Grego Applegate Edwards at 4:50 AM