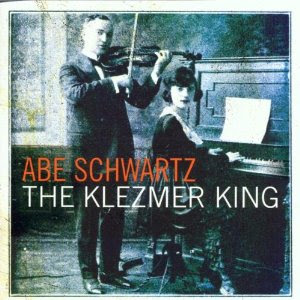 Abe Schwartz (1881-1963) was in the 1920s New York's most prolific and probably most well-recorded klezmer bandleader. The music was generally for a larger ensemble that might have gigged at a Lower East Side wedding, and the arrangements were more involved and broadly dense than would be expected outside the studio. His bands were sparked by clarinet virtuosi Naftule Brandwein and Dave Tarris. And he not only recorded klezmer proper, but also Yiddish theater, novelty, comedy songs and folk strains from the Eastern European diaspora that woud be quite familiar to New York Jews of the generation that installed victrolas in their living space and bought the records.

There's a nice anthology of some of his 78s that's been out for a number of years and still available: Abe Schwartz, The Klezmer King (Columbia Legacy 86321). It gives you a generous 25 selections, about half klezmer proper, half in the other categories mentioned above.

Those who have only heard Klezmer in its revival form may find the thick textured, old technology feel of the records a little unexpected. It takes some getting used to. But once you've gone beyond an adjustment period there is some wonderful music on this album. A few of these cuts have emerged here and there on revival releases since the 1970s, but not all that many and never in such concentrated form. This one is a very good Schwartz retrospective, well worth your time and around at a good price. Listen, enjoy, learn.
Posted by Grego Applegate Edwards at 4:50 AM