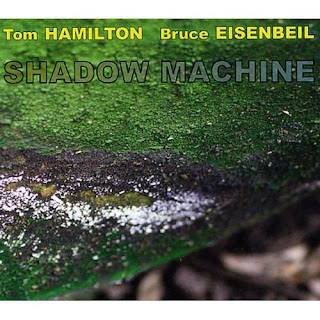 Noise, unusual timbre, texture, duration and percussives...these are some of the key elements in Tom Hamilton's (electronics) and Bruce Eisenbeil's (guitar) duo set Shadow Machine (Pogus 21051-2). I reviewed Maestro Eisenbeil's 1999 CIMP recording Mural some time ago (see posting for March 23, 2011). The 2008 duo we look at here shows a definite movement into more abstract territory. In part it is organic movement and in part it is a logical, creative counterpart to the sound and timbre-oriented electronics conjured by Tom Hamilton. Mr. Hamilton puts together soundscape symphonics of a noisy, ambient and well developed nature. Bruce responds with post-Derek Bailey virtuoso guitar avantics. He impresses with his well executed, fully controlled coaxing of unusual sounds and interesting noting. He sounds harmonics in abstracted clusters, plays below the bridge, mutes the strings and gets various electronically enhanced swoops and dives in a full spectrum of exotic electric guitar possibilities. It's some of the best avant guitar improvisational forays I've heard.

What's especially striking is the two-way Hamilton-Eisenbeil interactions and how they are both double solos and double accompaniments at the same time. They cover much aural ground in fascinating ways and with such deliberation that there is nothing that sounds tentative or experimental. The vocabularies are full and the musical conversations filled with impact.

It's the sort of "free" music that relates palpably to cutting-edge classical avant, yet has the sort of x follows y intensity of jazz.

It may be a sleeper, but it's a winner, start to finish. Highly recommended.
Posted by Grego Applegate Edwards at 5:03 AM