The Four Bags: "Forth," with Trombone, Accordion, Electric Guitar and Reeds 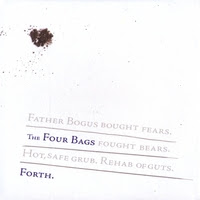 Don't think there's nothing new under the sun. Some days there isn't much sun, but if you seek it out there is always something new. The Four Bags quartet has a new one called Forth (NCM East 40132), and it is something out of the ordinary.

The quartet has been on the New York scene since 1999. They have the unusual instrumentation/lineup of Brian Drye, trombone, Jacob Garchik, accordion, Sean Moran, electric guitar, and Mike McGinnis on clarinet and bass clarinet. They are perhaps even more notable in their compositional approach than they are as improvisers, though all are quite respectable players, certainly. All four contribute pieces and there are some unusual covers as well--of an electronic piece, a Persian classical song, and a Brazilian Forro.

With the instrumentation a kind of avant cabaret spirit prevails. However they cover a wide spectrum of influences, from the world, as we note above, avant jazz, classical and a sort of folk flavor, all kept very much alive through very interesting arrangements and four-part writing. They manage to capture a kind of post-Weillian something that has been in the air for a while and transform in into something that seems very New York and, if you will, hip Downtown-like.

It's enough I hope to say that this is one of the more refreshingly musical disks I have heard this year. They carve out a group sound carefully, almost note-by-note.

This is definitely one of those new things under the sun. Check it out by all means!
Posted by Grego Applegate Edwards at 4:28 AM