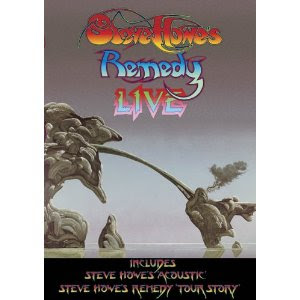 Steve Howe with Yes over the years defined a way to play in a largely conceived, almost orchestral prog context. He could be flashy but mostly he was distinctive in sound and very musical in the parts he developed for himself. The Steve Howe of his own group Remedy continues and extends that legacy in ways that go beyond Yes while still keeping to the initial impetus and sound he made such an important part of the overall ambiance.

Steve Howe's Remedy Live (MVD Visual 5252D) presents Howe and company in an extended concert footage DVD. It features his five-piece outfit (with his two sons on keys and drums, respectively) running through the repertoire of originals and some classic Yes numbers in 2004. The DVD also features a short solo acoustic set and good footage of Howe and band members in rehearsal and talking about the tour.

The sound is offered in the 5:1 option or as conventional stereo and it is very good.

It's certainly a disk that Steve Howe fans will appreciate. And it will give you some good ensemble and guitar work to get with if you have not followed Howe's career in any detail.

It's a thorough gas and a prog rock document of some importance. Give it a spin and dig on some fine sounds.
Posted by Grego Applegate Edwards at 4:33 AM