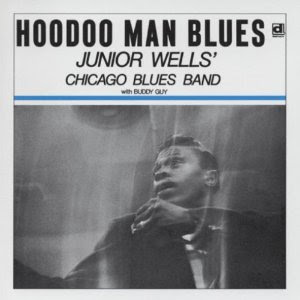 Chicago's soul blues dynamo Junior Wells was severely ripping it up by the mid-sixties. He combined some of the heavy qualities of the soul beat with the raw energy of Junior himself and the Chicago blues in general. His 1965 classic Hoodoo Man Blues pitted his leather-for-hell vocals with his wailing harmonica and all of that in turn with Buddy Guy's iconic guitar stylings and a hip backing band. It is with us again in a reissue (Delmark 812) that includes seven alternate takes, several unissued.

Junior of course had a vocal style no one else could touch, with at least five different vocal attacks and a face-full of blues. Buddy Guy was his perfect foil. And with this album every song is a miniature masterwork, some reworked blues classics, others associated exclusively with Junior.

It sounds as good as ever. Better, even. The alternate takes are not a huge revelation but it's good to hear the variations. The previously unreleased studio chatter slices give you a "you are there" feel, bring you into the studio as a spectator from the future.

This is prime Wells--very possibly his very best. And that is saying an awful lot. It is a must for any serious student of the blues. Or anybody who wants the blues to shine with the sun in today's back door (with any luck)!
Posted by Grego Applegate Edwards at 4:44 AM