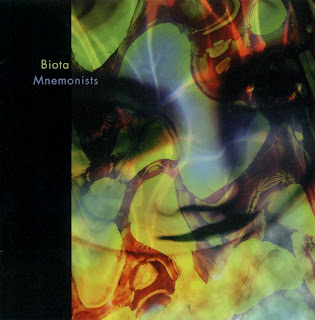 A friend of mine about a year ago heard some of my music and mentioned the group Biota as someone I might like. I followed up and found their Mnemonists, Musique Actuelle 1990 (Anomalous 025) on the web. Mine was a used copy; I believe the Biotamusic site lists outlets where it might be found new. The album was commissioned apparently by Montreal's Musique Actuelle--New Music America. This CD was a byproduct, if not the sole objective. It's a band formed in 1979 in Fort Collins, Colorado as the Mnemonist Orchestra and they are in a league of their own. Or were? It is not clear how active they are. At any rate it is one of a number of albums they have made.

This is music so unexpected and different that you must hang with it repeatedly to get on its wavelength. Much of it has a dark soundcape-y quality; other musical events punctuate and perforate the matrix to shift the mood and provide a different sort of gravitational pull.

It is not music that meets you half-way. Rather you are invited over to their terrain to make your ears comfortable as best they can. In the end you get something you might not have bargained for, an unexpected find of otherworldy sounds that evolve and transform in the hour-plus playing time, taking you places you have probably never been. Those with a need to seek out the very different will find this to their liking, I'd imagine. If you find, for example, that early Pink Floyd didn't go far enough into the cosmic landscape, this is no doubt for you. It is fairly extreme but also extremely well done.
Posted by Grego Applegate Edwards at 4:32 AM