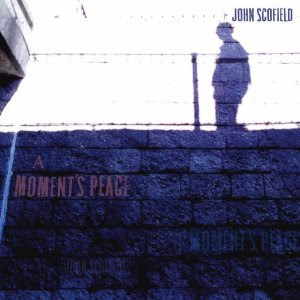 No artist should feel obligated to follow a set of dictates of what he or she should cover for repertoire. Cover standards, pop, or don't. It's a matter of what works best for the artist at a particular point in the music. John Scofield, a guitar-playing institution in the jazz realm for so long, felt the need to express himself with a set of ballads and gentle music. A Moment's Peace (Emarcy) came out late last month to that end. It shows you what a master improviser and an excellent quartet can do when they work their way inside a set of songs and get into what makes the music tick.

So it's Scofield with Larry Golding on piano and organ, Scott Coley on bass and Brian Blade at the drums. It turns out that everyone has embraced the music, tuned themselves finely and honed in on the beauty and power of the material. In so doing they have lost none of the artistry that makes then jazz musicians of the first rank. It's almost to the guitar quartet what Coltrane's album Ballads was for the famed tenor quartet. Scofield bends and soul-phrases his way through each gem. A late-night, after-hours quiet intensity prevails, like the audience has gone home and there are only a few friends and the musicians to get inside the songs.

Lennon & McCartney's "I Will," the perennial "I Want to Talk ABout You," "I Loves You Porgy," these are the heavy-hitting standards. Scofield sounds totally inspired by it all. Goldings, Colley and Blade get on the same beam and they are off. It's a monument to Scofield's depth of feeling and nuance of expression. A masterwork of Scofieldism at its best and most profound.

Do not hesitate to get with this one. It has it!
Posted by Grego Applegate Edwards at 4:20 AM