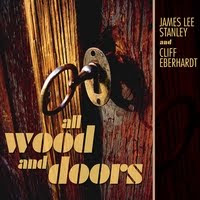 Who would have thought of an acoustic remake of Doors hits? Pickers-singers James Lee Stanley and Cliff Eberhardt have. All Wood and Doors (Beachwood 2010667) takes 12 well-known Doors songs and rethinks them thoroughly, sometimes recomposing them, for acoustic guitar, lead vocals, vocal backing and ensemble elements. They are joined by Doors bandsmen John Densmore and Robby Krieger as well as Peter Tork, Timothy B Schmidt, Laurence Juber, Paul Barrere, and others.

It provides alternative fare--a somewhat reflective, quieter rethinking of what Doors fans have heard for decades. The powerful Morrison baritone and rock electricity of the originals get put aside for a folkie-pop vocal-harmony thing and some tasteful strumming and picking. It's not meant to replace the originals and it most definitely does not. Instead, at its best, it gives a refreshing, heightened immersion in the songs and the lyrics themselves, which bear the new scrutiny well.

If you've lived with the Door originals you have a personal feeling for them, an experience of them. And you will react to the new versions in whatever ways you will. I am saying that not everybody is going to like this, possibly. Those who don't wont want to get past the originals; people who do will doubtless see this as an extra bonus, a supplement, not a replacement of the originals. I fall into the second camp.

It is quite well done.
Posted by Grego Applegate Edwards at 4:29 AM