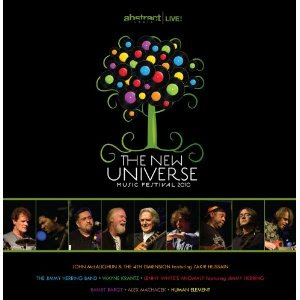 The 2010 edition of the New Universe Music Festival (Abstract Logix 2-CD ABLX030, 2-DVD ABLX 031) was a gathering of the tribes, so to speak, an extended look at the current state-of-the-art for fusion artists, mostly from the roster of Abstract Logix records. Fortunately the film and audio crew were well placed and captured the whole thing, the best of which is available as a 2-CD or 2-DVD set from the record label. I've spend some time looking and listening closely to these sets and I emerge with a good feeling about it all.

Whether listening to the CDs or looking-listening to the DVDs you get the same basic program. Alex Machacek, his trio and his advanced guitar work, drummer Ranjit Barot with a six-piece outfit, Scott Kinsey's keys and quartet, Jimmy Herring's guitar and quartet, Wayne Krantz's alternate guitar vision with a trio, famed drummer Lenny White leading a two-guitar quintet, and last but not at all least, John Mclaughlin with his quartet and a special appearance from tabla master Zakir Hussain. For the DVD version you get a bonus series of excerpts from the Tribute to McLaughlin, which includes many of the artist appearing previously. You also get interviews from some of the key players in the festival.

This is an excellent, stimulating program and the highlights are many. I would single out Alex Machacek for his spacey guitar work, Ranjit Barot's drum solo and Indo-Fusion, Jimmy Herring's guitar work throughout, Matthew Garrison's wacky de-tuned bass solo and very hip ensemble playing on the Scott Kinsey set, Lenny White's excellent performance, and the John McLaughlin finale and its stirring duets and trios with McLaughlin-Hussein and Hussein and the two McLaughlin drummers Mark Mondesir and Gary Husband, all of which brings home (as does the festival as a whole) how much Indian classical form and sophistication have become a mainstay in contemporary fusion. The segment also, to say the least, exhilarates with its dynamic interplay. Hussain of course is one of the foremost percussion masters of today and through his finely honed, rhythmically superlative performance he spurs McLaughlin and the drummers on to some of their most inspired playing in years.

The interviews are not uninteresting but ultimately dispensible, as are the highlights of the McLaughlin tribute. But they are bonus material only found on the DVD, so they are an additional reason why the DVD is the best bet if you have a good audio connection to your DVD system. Sound is excellent in either format and the camera work is very good as well.

So there you have it. The New Universe is populated with a consistently high-level set of performances. Guitarists, drummers, bass players, keyboardists and just plain fans will find much to like here. It is a bit of a scorcher! Highly recommended.
Posted by Grego Applegate Edwards at 5:07 AM