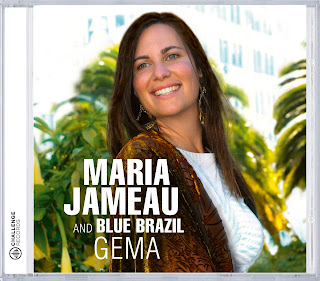 Singer Maria Jameau comes up with an eclectic mix of Brazilian bossa-samba standards plus African, Latin American and French folk and miscellania on Gema (Challenge 73304). It's Maria with a strongly pleasing delivery, vocal harmonies, plus percussion and as warranted, flute, guitar and bass accompaniments.

The song choice is good, Maria can sing, the backgrounds sometimes have the bossa-samba groove, sometimes Afro-Cuban clave, sometimes a combination of various elements.

The group is based in California. Bob Afifi plays solo flute with a Herbie Mann-meets-the-world sort of agility and lightness.

Summer is coming in Brasil. Those of us facing fall and winter up north will find this a nice way to escape. After you dig this one you might want to search a little for the original bossa-samba-classic recordings from Brazil. But this one stands on its own in a distinctive way.
Posted by Grego Applegate Edwards at 4:43 AM