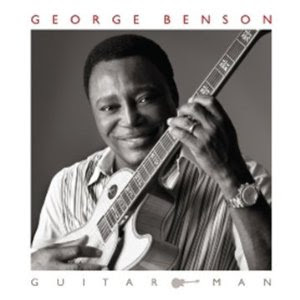 George Benson can, if he so chooses, play rings around most jazz plectrists out there. He doesn't always so chose. There have been many albums for him in his career, and for many of them he has hitched his star to the commercial muse (a contorted metaphor, but you will forgive me because it's 7 AM here). It seems that George would rather communicate to a general audience and incidentally reap the rewards of strictly commercial success than he would pull out all the stops and get a more limited following of strictly jazz aficionados. That's fine and it is indeed his choice. You get a glimmer, every once in a while, of what a monster player he is.

Take for example on his latest, Guitar Man (Concord Jazz). Yes, it has a pop veneer. There are sometimes those sweetener strings, a little of the disco beat, and he has that lounge lizard vocal thing happening on a few cuts, and he IS an excellent singer. . . . He gets into all kinds of accessible material too. Norah Jones's "I Don't Know Why," "Tequila," "My One and Only Love," but also "Naima."

And if you listen to the whole disk, which is a not unpleasant experience, George's brilliance breaks through here and again, with some stunning unaccompanied moments, some amazing lines just sort of thrown in there like a "yeah, I am great by the way."

I do not fault his tryst with success. That is not an easy thing. And I don't blame him for his pop orientation. With Guitar Man you hear in those moments where he lets loose that he still has that amazing facility and imagination that's been there all along. So if that's what we are going to get, then this is a good example of what he does and can do nowadays. I would love to hear him cut loose in a small group and take some long solos, etc. Maybe he'll do that next time? If not, we have this one, a document of the man today and a pleasurable listen.
Posted by Grego Applegate Edwards at 4:22 AM