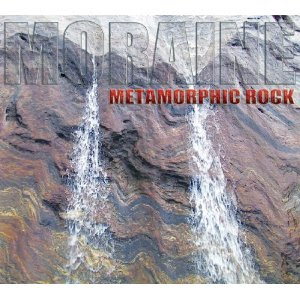 Moraine's first album showed the world they were a very smart prog/fuze outfit that offered a sound alternative to the usual ways of being new. Dennis Rea's torrid guitar styling led the way for a kind of great adventure in electric sound that drove home the idea that Moraine had an original vision and were well on their way to putting it forward for the world to dig.

Their subsequent 2010 appearance at NEARFest was well-captured and we now have what they played there on the new CD Metamorphic Rock (Moon June 040). This is especially strong as a all-band effort, with solid compositions by Dennis Rea and other band members and some interesting adaptations of traditional and contemporary world music. The instrumentation of electric guitar, baritone-winds, violin, eight-string bass, and drums is used to excellent effect in ways that make for an even more identifiable sound this time out.

The music generally is more sonorous and less edgy in this go-round, but no less original. It shows once again that Moraine is a band to follow closely in the years to come. And it's a terrific listen as well! Very much recommended.
Posted by Grego Applegate Edwards at 4:07 AM