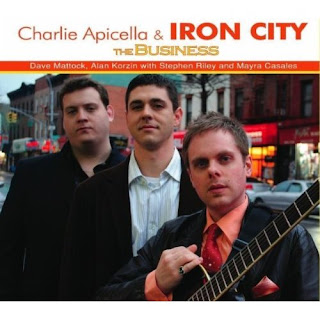 Charlie Apicella and Iron City return to the rootsy fold on The Business (CArlo 233). It's Charlie doing his version of Wes-Grant-Pat-George-rooted organ trio grits and gravy, a guitarist with soul and finesse. Iron City currently includes Dave Mattock on the Hammond, doing what one does in this bag and doing it with some style. Alan Korzin lays down the solid grooves on drums with Mayra Casales double-teaming him on congas. Finally there's Stephen Riley on tenor, giving out a breathy cross between Ben Webster and Stanley Turrentine, channeled in his own way.

Judging from these words by now you probably have an idea of what you get on this disk, and you'd be right if your mental picture conjures up the sounds invoked. The key factor though is that these fellows play it all like they mean it. They get maximum groove torque. They keep it all on with originals and exemplary tunes by some of the historic funk groovers.

Well and that's what it is all about. Like the idea and you'll like the disk, I have little doubt!
Posted by Grego Applegate Edwards at 4:44 AM