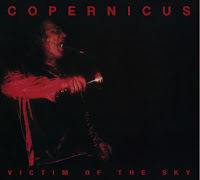 Copernicus has graced the underground of fringe rock and cult prognostication for many years. In the latest of the ongoing series of reissues/new issues of his music/rants we have Victim of the Sky (Nevermore Inc CD 2086), originally an LP from 1985.

In many ways this is one of the more interesting of his albums. The new wave-avant band seems very much in tune with what Copernicus is doing; Copernicus in turn seems more keyed to the band than is sometimes the case.

They do things that are more songlike at times, the raps are concise and we get a great version of his "From Bacteria" rant.

In hangs together as an album well. The thing about Copernicus, he grows on you. He is over the top in interesting ways. But ultimately you'll like him or hate him. That's the way it can be in life. This is one of his best, something most definitely to like if you are disposed so.