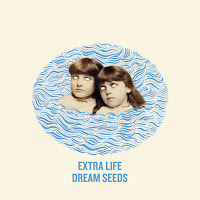 Judging from their new album, Dream Seeds (Northern Spy), Extra Life is a very quirky alt rock band with a somewhat disturbed vision of lyrical reality, a musical sensibility and song producing capability, and a peculiar lead vocal style thing brings them into a land unto their own, like a little island that via geographical isolation gets different things happening.

It's a concept album centered around dreams and children. Charlie Looker, the main songwriter, lead vocalist, synth, and acoustic guitarist for the band, apparently had a series of harrowing dreams involving children (he teaches elementary school). He took them as the raw material for the lyric content and devised an interconnected set of songs.

The songs are in an art mode--with twists and turns of all sorts musically, and lyrically a bizarre series of imagery/symbolism.

It's like nothing else around right now. That in itself is a recommendation. It should be heard by anyone concerned to experience what's going on in avant rock nowadays.

Posted by Grego Applegate Edwards at 4:45 AM