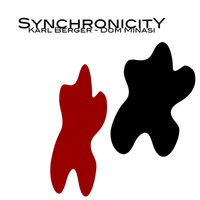 The teaming of Karl Berger and Dom Minasi turns out to be an inspired idea. That's not surprising. Both players are known for their thoughtful approach to free improvisation, Karl Berger as one of the vibraphone greats and a pianist of big ideas; Dom Minasi as a guitarist deserving wider recognition, who uses his well grounded technical and artistic schooling as a ladder to the higher calling of pure spontaneous music making. Both are originals.

The album at hand, Synchronicity (Nacht Records), brings out the qualities of the two in beautiful ways. They concentrate on the simultaneous interlocking creation of spontaneous lines much of the time. And they succeed in creating some major free improv poetry of the highest caliber.

Half the album features Karl on the vibraphone. For the other half he switches to piano. Understandably the second half gives out with more vertical harmonic aspects, the former more strictly a horizontal movement.

In both cases there is the magic of the moment in time, the satisfaction of musical originality, excellently executed.

It's music for keen, hungry ears and it delivers much for those ears to savor. In it's own way it's most certainly one of the high points in either player's recorded output. So I suppose that gives you the idea what I think of it. Listen. And listen again. And see if you do not think the same way.

Posted by Grego Applegate Edwards at 4:37 AM