Jason Ajemian and the Highlife, Riding the Light into the Bird's Eye 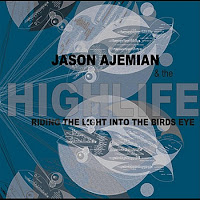 This morning another release from the New Atlantis label: a CD of Jason Ajemian and the Highlife doing Riding the Light into the Bird's Eye.

According to the New Atlantis website Jason uses CAD drafting software (at least in part, in some fashion) to compose his compositional structures. I cannot tell how that works and I suppose it doesn't matter. It's a mid-sized band here and I am not sure who exactly plays but there are horns, electric skronk guitar, rhythm, vocals.

It's free-out-rock-soul-composed fare and it is well done. There are moments that remind a little of DNA meets the AEC of "Theme de Yoyo." But it does not stay in one place for long. There is something with a kind of modern work-song-meets-Funkadelic feel, then it's on to something energetic and out-pulsed segued to some great blow-out horn action, and then on from there with some out riffing-funking out.

There's no telling where exactly they will go. The getting there, though, is out, creative, working inside of forms that have had some popular credence, but exploding them outwards, so to speak.

It's a good go and I'm not sure there's much like it out there these days. So give it a try.