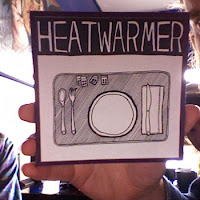 Heatwarmer (Table & Chairs) gives us the debut of Luke Bergman's unit, released at the end of 2009, recorded in his bedroom (mostly) over several years and now available at the moment as a download-only album on the Table & Chairs's site (on a pay what you wish basis).

He writes songs and arranges them in various interesting ways as a kind of modern-day Brian Wilson/Van Dyke Parks of Pet Sounds/Smile provenance. That doesn't mean that this album is on that level. But hey, this is the first outing.

The point is that the music has quirky arrangements and the songs are a little bit off-center in pleasing ways. And all this is a good thing.

Here's somebody to watch. Meanwhile check out the first album.

Posted by Grego Applegate Edwards at 5:39 AM