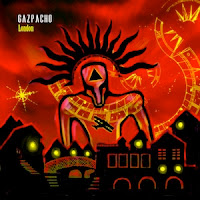 Gazpacho is a noteable Norwegian post-prog outfit. Their double-CD release from last fall, London (Kscope), affords you an in-depth listen to the band and its many facets in a live setting.

They play a sound-scape orchestrated sprawl-carpet of ambitious, somewhat melanchology music that excels in song form, arrangements, great vocal presence and instrumental skills. I accidently skimmed a review that compared them to Radiohead. Maybe so. I hear also a little of the Steve Wilson influence plus perhaps Jeff Buckley and the recent band Ours. Though it's possible that Gazpacho never even heard the latter. But there is a resonance.

What's going on here has teeth. It is formidable post-prog. It is impressive. It is moody. It is very, very good.

It's another rather extraordinary band in the Kscope stable. Find this one, keep it, and listen to it if you want something really worthwhile in this vein.