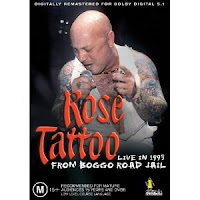 As a companion piece to the set played by the Divinyls (see May posting), Rose Tattoo hits the stage stomping it at the Boggo Road Jail for a set of hard Australian rock, 1993 style (Umbrella Music DVD/MVD Visual 5364D). It has the in-your-faceness of post-Stooges hard-drive crashing badness. Or that's how I hear it.

Angry Anderson's energetic stage presence and blues-scream vocals put it all together and the band bangs away at it in the fashion of hard blues-primal rocking. For all its excesses, the rock scene then was beyond commercial, which is more than you can say for some of the crap that hits the airwaves today. These guys may not be musical innovators. But they play hard and they mean it.

So the music is loud, the visuals work, and here it is, one of the best Australian rock bands of the era going at it for an hour. Why the hell not?