Lee Ranaldo, Between the Times and the Tides 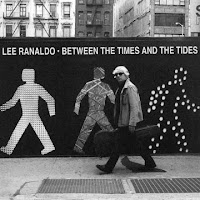 Right. Lee Ranaldo, the guitarist from Sonic Youth. He has a solo album out that's interesting. It's called Between the Times and the Tides (Matador).

The songs are something that Sonic Youth could have done--they have that pulsing-winding chordal sectionality about them. And there's a neo-psychedelic feel to the music. Having Lee sing all the vocals gives it a slightly different thrust. His voice is fine, but of course if you are a Sonics listener you can hear some of the others chiming in. That takes about two seconds to get beyond and then you are set for a very enjoyable set of songs.

He plays in the guitar style that is a so important half of the guitar sound of the Sonics. The songs stand out. Everything has an edginess that makes it good and the songs are memorable at the same time.

You like the Sonics, you will like this. It's different enough that you should hear it and probably buy it.