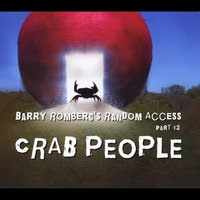 Drummer-Composer-Bandleader Barry Romberg has scored big with his Random Access band on the 2-CD set Crab People (Romhog 123). This is his twelfth release and, though I wasn't counting, this one corks it!!

The band includes Ben Monder and Geoff Young on very electric guitars, and some very hip players in general going after a post-Milesian-fusion-rock that is very advanced-funky and harmonic-line advanced as well.

Kelly Jefferson and Kirk McDonald play soprano-tenor and tenor, respectively and they sound good. Trumpet, two contrabasses, electric bass, percussion and keys round things out and it all hangs together exceptionally well.

About half the album puts together spontaneous compositional junkets, the other half addresses written motifs and their jammed, highly sound-colored realizations.

It's music that is out and grooves too. Really grooves when it gets into the mode. This is one hell of an electric band in a very adventuresome mood.

If you like out fusion, this will kill you!

Posted by Grego Applegate Edwards at 2:20 AM