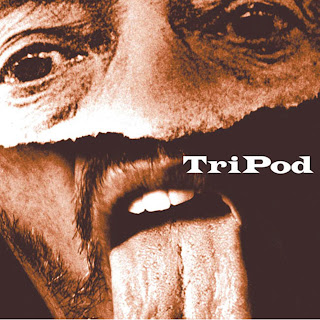 TriPod? Yes. Here we have a trio in the realm of such ensembles as Morphine--sax, bass and drums with vocals. But they don't precisely sound like Morphine. It's a prog-fuse, song-centered hard fullness created by the presence of Clint Bahr on 12-string bass and lead vocals (a twelve-string bass is composed of the standard four strings on an electric bass, plus two-octave strands per regular string...so 4+8=12), Steve Romano on drums and percussion, and Keith Gurland on alto and tenor, clarinet, effects and backing vocals. All this on their self-titled album just out on MoonJune (MJR004).

The music is somewhere in the realm of King Crimson progressivity, in its own special way. There are hard-edged, intricate arrangements, prog song niceties and a program that combines the two elements in judiciously balanced contrasts.

Clint Bahr's bass playing has a fullness that might make you think there's a guitar in there as well, but there isn't. He's playing the 12-string so that the bass and chordal possibilities come out strongly. Keith Gurland's saxophony is well-suited for the music and gives the music the second melodic voice in the ensemble that fleshes it all out. Steve Romano plays a LOT of drums as is fitting, and that sounds great too.

The songs-vocals put it all in focus. This is some heavy prog that should not be missed if you like the edgy Crimsonian thrust as I do.

And Clint's 12-string bass alone is a listen in itself. It's first-rate prog-fuse in any event.