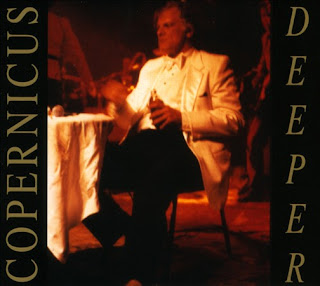 Someday, thousands of years from now, space creators may come to this planet, sort through the rubble, unearth the Copernicus CD at hand today, and, supposing they could figure out the digital technology involved and also learn English, scratch their heads (if they had any) and wonder what we were all about. I am wondering myself and I am from this culture!

I speak of Deeper (Nevermore, Inc 2087), a reissue of Copernicus's 1987 opus. It is one of his best from a standpoint of a synergy between out-rockband and Copernicus's impassioned, bellicose incantations. The band is rather large and Copernicus responds in kind, giving us an inspired lunacy fully befitting his determed-ly marginal status, an outsider crying not in the wilderness, but shouting a message from the periphery to the center.

I've said this before, but Copernicus takes the sort of dark imagery of Jim Morrison in "The End" and takes it further, further, to a world that might not seem like OUR world. But in fact, it is. So, it speaks to us. Do we listen? I don't know. Copernicus will never be on top 40 radio, especially not today.