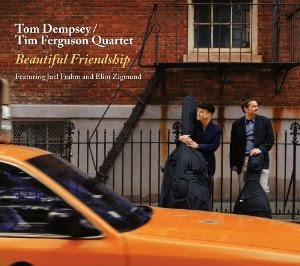 It's not exactly the norm for a quartet to be fronted by a guitarist and a bassist. While that happens to be perfect for this blog, it's also something very worthwhile when it's the Tom Dempsey/Tim Ferguson Quartet and the album is Beautiful Friendship (Planet Arts 301226).

What we have here is a first-rate straight-ahead jazz gathering running through some standards, jazz standards and originals. Tom Dempsey plays a harmonically well-healed guitar. His comping is beautiful to hear. And his solo work has that endlessly variable play-all-night feel to it. He can invent plenty of nice choruses if called upon, I suspect, though all of the numbers are relatively short.

Tim Ferguson has that propulsion that drives a band along swingingly, that drummers love. He takes solos that have imagination in that post-Paul Chambers sort of mode.

Tenor-soprano artist Joel Frahm has good sense, great tone and solo ideas that stand out. He manages not to sound like anybody in the process. Then Eliot Zigmund. You may remember his work with Bill Evans. He is a model of the interactive, small-band swinger.

Those are the pieces. The whole fits quite well together. Standards and originals flow and the solos say something. Well done!