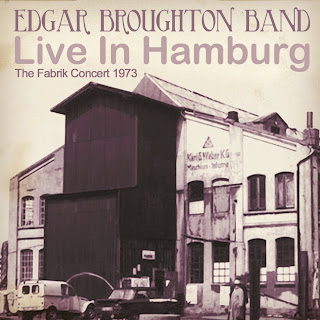 There's an old joke that goes "if you remember the '60s you probably weren't there!" I do, though, and I was there, at least as far as time zones are concerned. What has struck me over the years is how many things, at least in music, attributed to the '60s are in fact a product of the period between 1967 and 1974.

The CD up today qualifies. It is a concert recorded in 1973. The Edgar Broughton Band hold forth Live in Hamburg (Sireena 2107) for a lively set. They are English and in loosely good form. If you are not familiar with them, I actually wasn't either, so not to worry. If you are, then you have a leg up on the rest of us. They play music that is usually more associated with the '60s than 1973, hence my opening salvo.

They have that loud, brash, in your face insouciance of the MC5, only English style, somehow. . . . plenty of heavily amped guitar power-chording and an authentically frantic vocal style are there for you to appreciate in the 75 minute set.

The sound is typical of what a loud band in a club might produce back then. It is not going to win any sonic awards but it has the sound of the real thing from the period.

It's the hard-knock school of psyche-rock, and if that sounds good I think you'll like this one indeed.

Posted by Grego Applegate Edwards at 7:33 AM