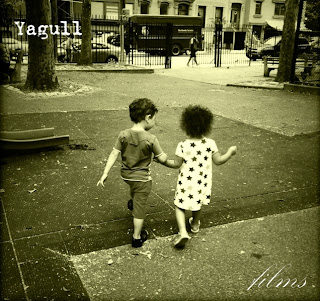 According to my press sheet, Yagull is an "acoustic power project." That is an interesting way to put it and so I quote it straight off. It's the baby of guitarist Sasha Markovic. The new CD Films (ZOZE 12001) has 15 ambiently mellifluous numbers, a cross between Oregon and an instrumental Moody Blues in some ways, in other ways just original music, well played by Markovic on acoustic plus Lori Reddy on flute, Eylon Tushiner, saxophones, and Sonia Choi on cello. There are unusual versions of "White Room" and "Sabbath, Bloody Sabbath." Otherwise these are Markovic-penned.

The music has some of the mellow qualities of new age, but there's more to it melodically-harmonically. And I found it nice listening after I got used to what it was about.