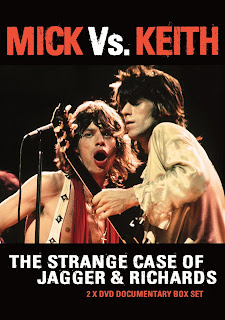 On tap today is a 2-DVD box set on the Rolling Stones: Mick vs. Keith: The Strange Case of Jagger & Richards (Chrome Dreams DVD-IS 035), which contains two complete documentaries: The Roaring '20s: Mick Jagger's Glory Years and Keith Richards Under Review. The latter covers Richards' career as whole, the former Jagger and the Stones when Mick was in his '20s.

Both DVDs take the form of review bios of this sort, covering the period of time in terms of salient events and recorded output. Because both DVDs come to grips with similar time periods at the intersection of the '60s through early '70s there is some overlap, but always from the perspective of either Richards or Jagger.

In the end the emphasis is on the development of the Stones as the premiere hard rock outfit of its day, especially from the advent of the hit single "Satisfaction" through Let it Bleed and a bit after. Most certainly from the perspective of Keith Richards, this was when his growing influence was key to the instrumental punch of the group sound. It was also when Jagger did some of his best work.

The DVDs take the form of chronological narrative with key critics commenting on the recordings and those who were witnesses to the period relating what they experienced.

The critics don't have much good to say about the music that did not follow the blues and r&b sides through to the hard rock breakthrough. The folk rock and psychological aspects of the band in the '60s are fairly roundly dismissed. That is probably how the mainstream of Stones fans feel who came to the band later in the history--especially as their fame and popularity as a live act spread. And the critics cited here have something to do with stressing that interpretation of the band in print.

Others (like myself) may feel that the less prototypical Stones work for that period has at least equal interest. No matter. Brian Jones's influence and input understandably gets less attention, given the subject matter of the DVDs. And that too is part of Stones orthodoxy.

Altamount, Richards' drug problems, Jagger's increasing infatuation with success and the glamour life are all given due consideration. The directly musical aspect of the Richards documentary is perhaps the most interesting, e.g., his way with a riff, his guitar tunings, etc.

It's all quite respectable entertainment, informative and rather insightful at points. In the end it is the sort of documentaries that Stones fans will find to their taste and anyone with an interest in the era.

Ultimately I was brought to wonder at the resilience of Richards in spite of personal difficulties, the balsiness of Jagger and the development of his stage persona, the fragile interaction of the two when the band was at its later best and the long run of great music they managed to produce.

This is not the last word or thoughts on the Stones, of course, but well worth seeing.