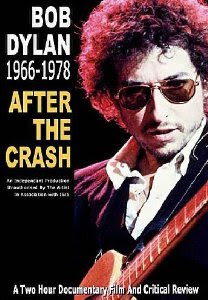 Herewith, a documentary about Bob Dylan during a critical period, a crises period, a reaffirmation period and then at the end of the time, a religious conversion. Bob Dylan After the Crash (Pride DVDCD 155) goes into some depth about it all and I suspect even the avid fan will learn something.

This is the time when Dylan plugged in and toured, found audience hostility and soaring popularity all a bit overwhelming, crashed his cycle, retired to Woodstock with the Band to experiment with a more directly rooted electric folk, ended up recording some country albums, seemed less political, was taken to task by A. J. Webermann, ended up finding a new more committed sound and took it on the road as the Rolling Thunder Review, and such.

The confrontational phone calls between Webermann and Dylan are proffered on the bonus CD and it gives you a glimpse of a time period and a side to Dylan we don't always get--a Dylan a little unsure of himself. The conversations give a candid insight into the personal meaning of his music (he was mostly addressing the lyrics to himself, he says) at the beginning and the transformations he went through, and there are moments that are rather funny to boot.

This is not the last word on Dylan, but it does a good job raising points and covering ground. Dylan fans will dig it for sure. Others with an interest in the period will be entertained and informed.