Janel & Anthony, Where is Home 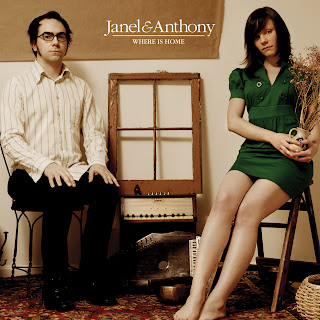 Those who think there's nothing happening in the music scene right now are either not listening because they already have satiated their musical brains with old disks, are not reading my blogs and other info channels that work hard to get the news on the good stuff to you, or don't care. Or whatever else the reason. I wouldn't harp on it except the artists need support. Me? Yeah I am one of those too, but never mind. I mean an artist...not an uninvolved musical slacker. We music workers need your support!

Today's example is as good as any. Better, even. It's Janel & Anthony, two youngish folks judging by the album cover making some really stunning space-age retro-modern ambient post-psychedelia that will make you put away your Fripp and Eno for a while and climb into something new.

The album is called Where is Home (Cuneiform) and I might be tempted to answer, "wherever this record is playing," but I don't mean to be flip or faux-clever because I am serious. This is music that sounds like home to me.

So what is it that's got my bundies in an undletow? Well these two play some instruments, obviously, and some of that involves guitar and bass, duh, so it's posted here on this blogpage. It's Anthony Pirog on those guitars and he plays the right things--not to blow you away with chops and that's fine because some guitarists can play so fast these days you think they might explode and then what? Find a new guitarist, I guess. Anyway he plays tasteful ambient psychedelic sorts of things. Janel Leppin gets a burnished beauty from her cello and the two get a frothy sort of cosmos in your head going.

Sometimes it is very ambient in that cavernous way and sometimes it is a chamber kind of closeness, but in any event this is music to take very seriously. No moozac new oldage setting in at all. But it's lyrical, poetic and oh so hip.

What this proves is you can go lyrical and cosmic and not necessarily sound like everybody else, while still showing a place in a lineage that goes back, to Fripp and Floyd, mesmeric Byrds' moments, mesmeric Smiths moments, Terje Rypdal on a cloud, and on anon.

Thinking about it some more--in a way this is not post-anything because it never really left; it's a new version of the real cosmic deal. Now I suppose I should say that I highly recommend the recording. Can't you tell? I do.

Support these deserving artists. Plunk down some money for a CD or DL! Trust me, it's good music.