Annette Cantor, Songs to the Goddess 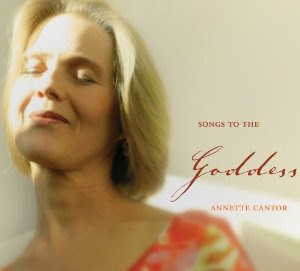 Anyone who reads this blog knows there is much about New Age music I do not like. But every once in a while something comes along that stands up (and out) as musically quite valid and interesting. Such an album is on tap today for your consideration. The artist is singer Annette Cantor and the album is Songs to the Goddess (Source Being).

It has all the trappings of New Age music but it stands on its own. Imagine that there was no such thing as New Age and instead this was just an album of cosmic things. In that way it is the equivalent to some of the psychedelic mood records that came out in the late-'60s-early '70s, like Music from the Zodiac, if anybody remembers that.

It has its own musical center from which comes Ms. Cantor's pleasing warbles, dedicated especially to Mother Earth.

Well now you may scoff, but it does work as music, and that's all I care about, really. You decide for yourself.