Larkin Poe & Thom Hell, The Sound of the Ocean Sound 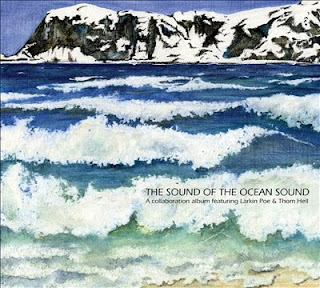 Just because I don't usually cover a substyle of music here doesn't mean I shouldn't, if something comes along that's good. Here is that something: Larkin Poe & Thom Hell's The Sound of the Ocean Sound (self-released). It was recorded in Norway and Atlanta, Georgia. Now that may seem unusual but there is a reason. This is a collaborative effort between Larkin Poe (aka the Lovell Sisters) and Thom Hell, a Norwegian rock-pop figure of some repute.

Rebecca and Megan Lovell play acoustic guitars, Megan a hell of a nice dobro, Rebecca also plays mandolin. Rebecca sings lead vocals, as does Thom Hell (and he plays piano and some acoustic guitar throughout). Megan sings harmonies, as do they all as needed. Then there is a solid rhythm section.

It's a lyrical, very nicely done set of songs in a country rock mode. The vocals are really, really nice. And that dobro!

It's just such nice, memorable music. If you like Emmylou Harris or Alison Krauss, there's something here you'll resonate (dobro!) with, I am quite sure. The country Byrds come to mind just a tad too.

So I don't know how far you go in your tastes--in fact this may well match them perfectly. I can go pretty far around the musical planet when something is good. This something is good! It really is!

Posted by Grego Applegate Edwards at 7:29 AM