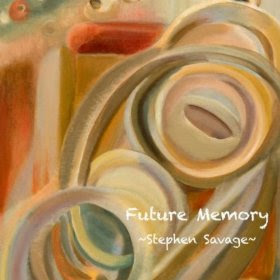 It's easy to pan synth-pop tracks that have no soul. I do it myself. What's hard as with any instrumental combination is to make really good, engrossing, satisfying music, if it's with a bunch of keys and synths or just a cathedral organ. A string quartet. It's what you DO that matters. Stephen Savage does that. Future Memory (self-released) finds him composing music that requires him to man all those electronic instruments plus conventional keys and guitar. Michael O'Connor joins him on drums for part of the time and that works out fine.

What this is I suppose you could say is a cosmically aware space and time form of prog rock. Some sounds a little Zappa-esque, some has a fused provenance, but it's all about the place inside where you conceive of good musical composition ideas and then realize them almost all by yourself in a studio. Now that's easy to poo-poo as not "live" (though of course it's as old as electronic music, and face it--ALL recorded music is "not live") somehow not "organic," and not authentic in some back-to-nature hippie sense that as we now know does not give us nature back any more than nature is something to over-exploit endlessly without courting disaster.

My point is only that the musical result is what we should look to and dismiss only if it is not musically worthwhile. Future Memory is very worthwhile as MUSIC! You aren't going to hear a lot of fleet and intricate soloing because this is prog composition more than axemanship. And I am NOT putting down axemanship either. This isn't going to give it to you is all I am saying.