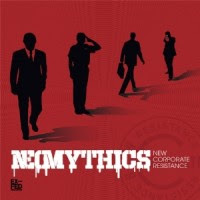 How you will like Neomythics and their album New Corporate Resistance (ExFed) depends on how much you crave new rock that is catchy but committed to telling a story--and has some heft. This band delivers that. Matt Montgomery and Gregory Howe are essentially the driving forces behind this band, which is strong on guitar plying, bass walloping and hard-ish drumming from one Lumpy and also Thomas McCree. Howard Mandel gets some nice guitar action on a few cuts as well.

It's youthful sounding in the vocal department. If you ARE young that wont be something you'll notice, though. If you aren't you'll get a feeling you were here a while ago, because of course the bands WERE young when we were.

So I am posting here because I find these guys interesting. The band has songs, a slight lyricality, solid arrangements and rock rawness in a combination that used to have a presence on top-forty radio. This is probably not going to be top-40 fare because it is lyrically direct. Well and we don't mind that, do we?